South Point 400 is the first Las Vegas race in

NASCAR history to kick off the Cup playoff series 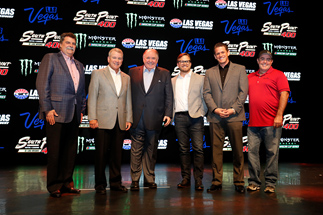 LAS VEGAS – The South Point Hotel, Casino and Spa has been named title sponsor of the September Monster Energy NASCAR Cup Series race at Las Vegas Motor Speedway (LVMS). The multi-year agreement will make the Michael Gaughan-owned property title sponsor of the South Point 400 beginning in 2018. The 267-lap race, set for Sunday, Sept. 16, will be the first in the 2018 Cup playoffs.

The sponsorship underscores a longstanding partnership between LVMS and Gaughan that dates to the speedway’s construction in 1996.

“Michael Gaughan has been a great friend to Las Vegas Motor Speedway for decades, and we’re infinitely proud to have South Point as a major part of our first Monster Energy NASCAR Cup Series Playoff race and our inaugural fall tripleheader weekend,” LVMS President Chris Powell said. “The South Point 400 will showcase the best drivers in the world at one of the most fan-friendly and dynamic tracks in the country over the course of a weekend that fans will long remember. The coming year will be an historic one for our speedway, and we’re ecstatic about what the future holds for Las Vegas Motor Speedway, our fans and our partners.”

A longtime off-road racer, Gaughan has been a motorsports enthusiast for decades, sponsoring races at LVMS since 1998 as well as race teams led by his son, Brendan, in the NASCAR Camping World Truck Series and NASCAR Xfinity Series through the years.

“I was there from the beginning of the Las Vegas Motor Speedway and it’s a thrill to now have the South Point 400 begin the Monster Energy NASCAR Cup Series Playoffs in 2018,” said Michael Gaughan, owner of South Point Hotel, Casino and Spa. “Racing has been one of my life’s greatest passions and it’s a dream to be deeply involved with a sport I love. The South Point and LVMS have had a long and strong partnership, and we can’t wait to be part of the track’s second tripleheader weekend next year.”

The South Point 400 will be preceded by a NASCAR Camping World Truck Series race on Friday, Sept. 14, and a NASCAR Xfinity Series race on Saturday, Sept. 15. LVMS will be the first track in NASCAR history to host two tripleheader weekends in the same year.

Special race weekend room and ticket packages are available at the South Point Hotel for fans planning on attending the September race, and they can lock in those deals on the casino’s website.

Race fans can buy tickets to both LVMS tripleheaders and capitalize on discounted prices by purchasing annual passes for all six NASCAR races. The track’s 2018 six-pack of events will show off a number of enhancements the track has planned for the coming months.

Las Vegas Motor Speedway is a wholly owned subsidiary of Speedway Motorsports Inc. For more information about SMI, log on to www.SpeedwayMotorsports.com.